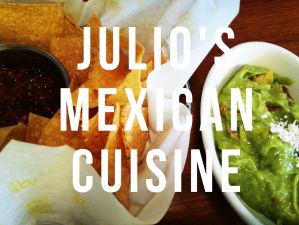 After a brief hiatus from updating the blog, I’m back with a food review because, well, they’re the easiest!  I’ve made it my personal mission to get out and explore something new this weekend but, as of now, I’m sat comfy in my bed watching old episodes of Black Books and drinking a heavy dose of coffee to get through writing this simple review :D.

I’ve already gone over my affinity for Mexican food in my review for Vatos Tacos. To sum up my Vatos experience: I was disappointed. When I asked for recommendations for other dishes at Vatos I was told to order mostly Korean Fusion Mexican food (like the kimchi fries…fries? At a Mexican place?  Meh.) .  I don’t mind fusion food at all, I cook it often in my own kitchen, but it had left me with no restaurant to call my own Mexican sanctuary.

Julio’s is in my neighborhood (sort of) and without realizing it when I planned to go there, it’s owned by the same person who owns Pier 17.  So, I visited both restaurants in the same weekend not knowing this fact. I am quite interested in the person who decided they wanted to bring both Cajun and Mexican food back to Korea. That person might just be a culinary angel.

Julio’s hit the spot.  The chips were proper Mexican style chips and the salsa was nice.  The guac tasted alright at first but then it hit you with some strange aftertaste…I’m assuming its whatever they used to keep it green. I would probably pass on it next time around.

I re-ordered the carnitas (slow cooked pork) tacos, which I found so disappointing at Vatos, and I am happy to announce that Julio’s were moist and seasoned well.  They came with a flour tortilla which I prefer over a corn tortilla. I probably could have ordered more of them and ate all four on my own.

We ordered the chicken enchiladas as well. I’m not a huge enchiladas fan, honestly, its not a very “fresh” tasting dish…and while the sauce tasted alright I’m pretty sure its from a can.  However, I must give respect to the fact that it came with actual refried beans and chips to sop up the sauce. That’s something you don’t see much of in Korea and came across as much more traditional of a plate. It was a measly amount of beans but I was so excited to see them!

The quesadilla was standard but they do give you a nice side plate of accouterments : tomatoes, lettuce, onions, guacamole, and crema fresca.  I have one thing to complain about this dish though and I think I’m entitled. The small red sauce next to that quesadilla is MARINARA sauce, which I do not understand when they have a very nice salsa to serve with it.  Marinara sauce. Gross.

While there are always little gripes with me, overall I really enjoyed the meal. It tasted much more like what I can get back home, you get more for your money than at Vatos and its walking distance. Until I find a better spot, this will be my Mexican sanctuary.

NOTE: on this road you can also find Double Trouble and Brick Oven Pizza ! You’re welcome! 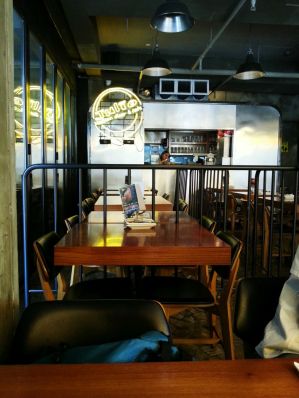 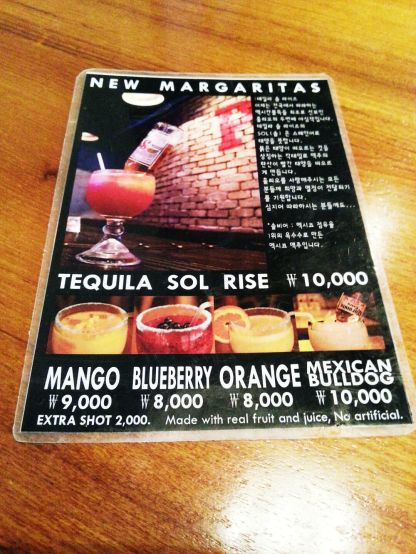 A huge menu plus a frozen margarita menu. 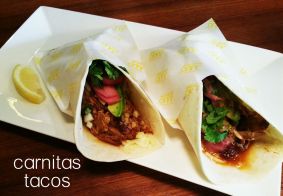 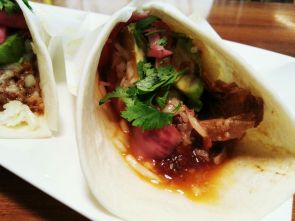 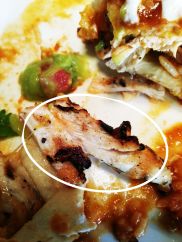 Real REAL grilled chicken complete with black marks that some ajumma didn’t come along and snip off!